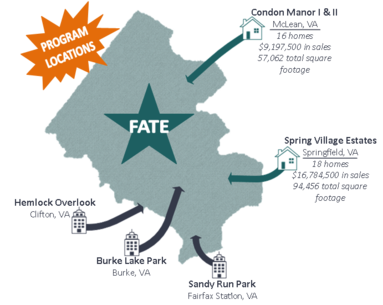 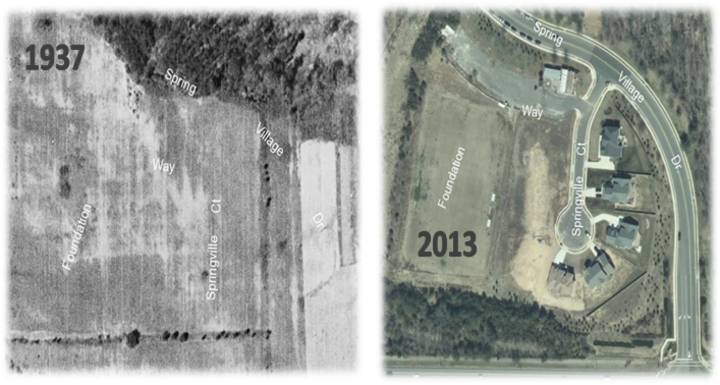 The Spring Village Residential Construction Site is a unique, community-based, construction technologies program in Fairfax County. This construction site, located in Springfield, Virginia, provides students with the opportunity to build single-family homes in a residential community. Students receive classroom instruction on-site and apply their knowledge directly to the house under construction. In addition, students gain valuable experience and knowledge about the construction industry as they work closely with various sub-constructors in specific trade areas.

sixteen single family homes in the Condon Manor I & II

to greater than 6,300 sq. ft. with sale prices starting at

A groundbreaking ceremony was held in June 2006

to officially kick off the new project known as Spring

of 18 single family homes built in partnership between FATE,

students realize their career goals in the construction industry. The new site is located at the intersection of the Franconia-Springfield Parkway and Spring Village Drive.

The 2006 summer program helped to complete the transition to Spring Village by setting up the office and classroom trailers, in addition to building a deck as a staging area and putting a fence up around trailers.

The 06-07 students helped with the foundation forms, and then learned how to layout the "ground work" (first step in the plumbing installation) for the first home at Spring Village, working alongside industry professionals.

Another first was for the framing to be installed utilizing a "framing package". By using panelized walls and a TGI flooring system, the students were exposed to a more modern, industry-accepted way of framing the house. They also had the opportunity to stick frame the interior non-load-bearing walls.

The summer class of 2007 accomplished the goals that were set, framing the interior second floor walls and installing all of the windows and exterior doors. All in all, the 2007 school year finished on a high note meeting the expected goals.

By February 2010, the students had completed all of the
construction elements of the first lot in Spring Village Estates
and had completed the site work and setup of the first court in
the neighborhood.  The home was listed and went under
contract within two months. The sale price for Lot 1 was
$750,000 for a 3,600 s.q. f.t. home on just under half an
acre.

Students began work on Lot 2 in September 2009, and
worked side by side with Lot 1 learning about rough
carpentry followed by finish carpentry as they worked
between the two houses under construction.  After the sale of Lot 1, the students quickly focused their attention to Lot 2 and completed the home in the winter of 2011.  The home was listed in March for $775,000 and subsequently sold for that listing price in July 2011.

BUILDING THE FUTURE...ONE STUDENT AT A TIME